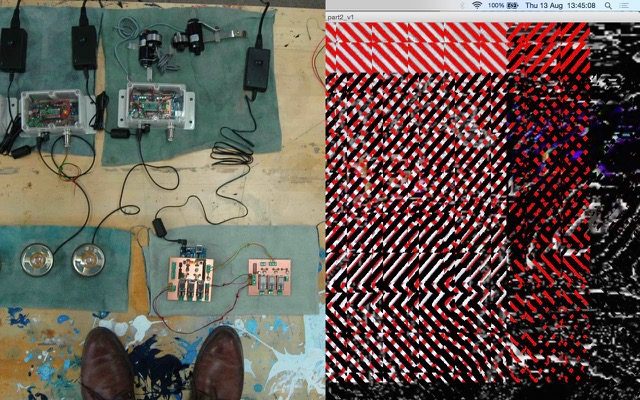 We started coding in Processing/Java programming language software to manipulate video as a constant stream of single still images. EXCERPT sofatware allows reaching or manipulating each pixel of the picture/frame from the video materials, and outputs it as new video stream.

This perspective allows a new type of work in real time video manipulation. EXCERPT does not only work as a video mixer that would merge video streams into a single channel, EXCERPT intends as well to gather video streams in screen spaces, and a ground to implement real time generated images. An Excerpt is defined as an extract from a larger work. EXCERPT software screens part of the video material in division of space and techniques.

EXCERPT connects perfectly with Arduino, and trigerring video material with sensor data happens easily. Moving images can be  controlled by real world sensors bridging the gap between sensible world and on-looker position. Once the code ready for the specific use, it can be exported to an application for computer and scheduled to activate according to gallery opening hours.

EXCERPT is open source and it is encouraged to be shared!

The workshop would benefit having access to 2 or three video projectors. Participants should bring their laptops.

Gregoire Rousseau is a Helsinki-based artist, educator and expert in technology. He graduated in Computer Science in 2006 and received Master of Fine Arts in 2018. His research focuses on electricity as a form of energy in the arts and its social and political implications. He lectures on technology in contemporary art practice in art academies in Europe, exhibits internationally and co-founded and contributes to Rabrab Press.