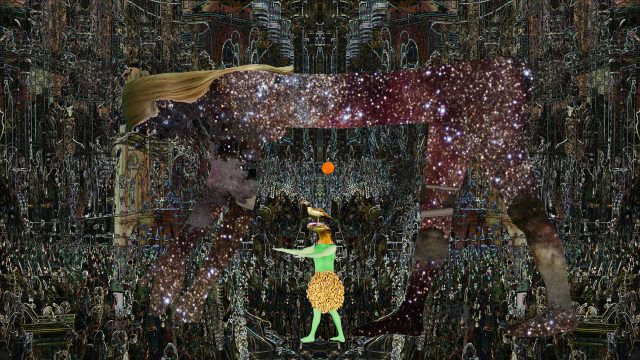 This as yet untitled video series will eventually consist of 189 videos of less than a minute each. The 189 number is in relation to the number of spells in the ancient Egyptian “Book of the Dead”. All though the first part of this series will revolve around ancient Egyptian iconography and myths, future parts will delve into other ancient cultural mythologies and Icons(Hindu, Norse, Persian, Maya…etc.). with a strong possibility of some crossover near the end of the series. These videos will focus on examining several philosophical works related to Language, Text, Structuralism, and Deconstruction. The conceptual sparks for this comes from my recent readings of Jacques Derrida’s “Of Grammatology” and “Writing and Difference”, Marshall Mcluhan’s “The Gutenberg Galaxy”, James Joyce’s “Finnigans Wake”, as well as several lectures about Language and Literature by Michel Foucault. This list wil undoubtedly expand as well considering the amount of time this project will probably take(4-5 years maybe). All though I plan on sequentially numbering these in Roman numerals as they come out, they do not need to be viewed in any sequential order. And they should be able to either be viewed individually, and/or randomly grouped. Ideally these should be viewed in 4K resolution.

All though I’ve been working primarily in digital media for several years now. I’ve always felt my creative process is more akin to the cave painters of prehistoric Spain, and France. I like to feel as if I’m doing some sort of Magical act. Some sort of Shaman like Ritual connecting me to another dimension, something beyond myself. Rather than creating just another Cultural commodity to be bought, sold, or invested in like Pork Bellies, or Oranges. Sensory stimulation is important to my art, but it is only one facet of what I’m trying to do. My Art must have some kind of Political, and Philosophical(usually one and the same) direction. It must be about the now, looking through the lens of the past, progressing to the future. For me the Digital is my Magic wand of the Hyper-Real, and my Simulacrum of Geist. How could this be for sale. It is a Gift assembled from the best parts of other Gifts. From a long line of Artists,Thinkers, Witch Doctors, and Prophets going all the way back to those afore mentioned Caves. And probably even before that.