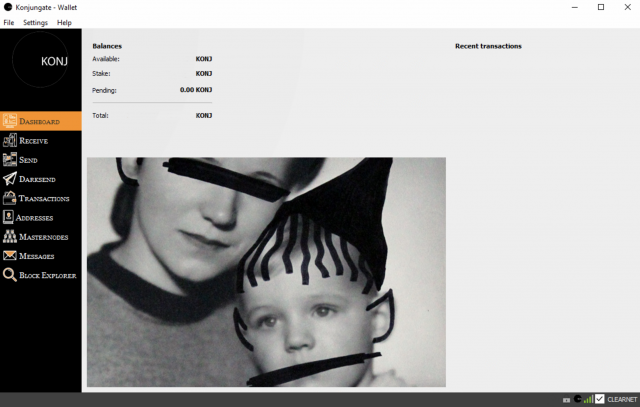 To change the funding of Artists and Institutions.

KONJUNGATE is based on the cyber novel MACHFELD written 1999 by Michael Mastrototaro. Strangely, the main character of the book is called Nakamoto and thus resembles the pseudonym of the BITCOIN inventor Satoshi Nakamoto. What a coincidence, right? Anyway.

In his cyber novel, he describes 9 years before Bitcoin appears on the cryptocurrency horizon the mining of KONJUNGATE.

Now 20 years after publishing the novel online, KONJUNGATE appears as a Media Art project to decentralize the funding of international contemporary Artists and Institutions and to give a strong artistic statement in times of budget cuts.

How does it work?

During the creation of the KONJUNGATE Blockchain, 1,25% of the total digital assets was premined. This amount of Tokens will be used as an initial fund for distributing the Token to a wide range of international Art-Institutions, to support contemporary Artists and as registered capital for the charitable MACHFELD-Foundation (in establishing) which will ensure further distribution of tokens in the future and its task is to ensure value security by means of art purchases.

The GENESIS BLOCK is usually the very first block of a blockchain. However, the MACHFELD GENESIS BLOCK consists of a material and an immaterial part that can only be seen as one unit.

In the starting phase, 4 objects are designed. These are in the form of 4 parts of a block and are modular expandable in a row. The material part is a reference to the immaterial that settles in the institution or its system.

The immaterial part is a MASTERNODE of the KONJUNGATE network. It is a computer program that is implemented in a system to generate the crypto currency KONJUNGATE through the MASTERNODE in an energy-saving way.

Thus, the artwork itself is an art funding program that is understood as an alternative or in addition to common funding practices. The installation enshrined as GENESIS BLOCK thus does exactly what institutions themselves (should) do, namely to fund contemporary art. In this sense, the installation shows “we are on the side of art producers”. In addition, the institutions also show that they participate in an international network that enables alternative art production.

This is clearly symbolized by the material block the institutions should exhibit in a prominent place. Through a QR code attached to the object Visitors will be able to install a “Wallet” on their smartphone and immediately become part of the decentralized funding system.

Through our project, institutions are part of a networked value chain process using Blockchain technology. This process is also accessible to individuals, artists and promoters – for anyone who is interested. The plan is to create a nonprofit foundation that will be able to directly promote out-of-the-box artists to a greater extent, and to ensure price stability for KONJUNGATE by building a collection of contemporary art.
The goal is to create alternative funding opportunities through an artistic process.

Thus the novel MACHFELD is materialized again 20 years after its existence, in another language – the language of the cryptography.

KONJUNGATE adds a social aspect to the crypto landscape. Created from the means of art, it becomes a decentralized subsidy and again gives art institutions a timely instrument to promote contemporary artists. Calls directly promote artists.

Perpetual traveling through the offline realities of world
geography, through their time zones, their landscapes
and urban agglomerations shapes the artistic work of
Michael Mastrototaro sustainable.
On site, the Vienna-based artist examines social,
economic and cultural conditions.
In the course of process-based art projects, he often docks
together as part of the MACHFELD entity on local levels
of meaning of the locales they seek to formalize their
specific sign systems and grammatical structures in different
processes as concentrates and condensations.

While extensive fieldwork combined with explorations in countries of southern Africa, Central America, the USA, southern China or areas of his immediate Central European living environment plays a central role in the work of Michael Mastrototaro, the concepts remain predominantly media-oriented and reflect established conventions of perception. In 1999 he founded (together with the media artist Sabine Maier) MACHFELD. Based on his cyber novel of the same name, MACHFELD developed into an entity with a focus on transmedial art forms. In the course of the years, artistic
projects developed in the field of tension between: cryptography, photography, literature, net art, short and experimental films, streaming projects, interactive installations, radio art, on- and offline performances as well as art in public space. Most of his works were created under the pseudonym MACHFELD. Projects, exhibitions, lectures, readings
and screenings in: Africa, Asia, Europe, Central & North America and the USA. (eg Hong Kong Arts Center (Hong Kong / Hong Kong Special Administrative Region of the People’s Republic of China), University of California (Santa Barbara / USA) Bag Factory (Johannesburg / South Africa), Kunsthalle Basel (Basel / Switzerland), Museum of Modern Art (Detroit / USA ).