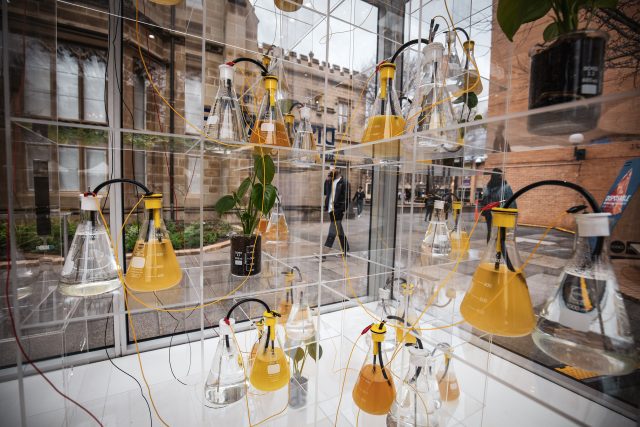 “Urinotron” is an installation that can take many forms and whose function could be summed up to produce electricity at a local or even micro-local level, from an organic waste, familiar but intimate, the urine.

This project, bringing together the two artists Sandra and Gaspard Bébié-Valérian and the designer Dorian Reunkrilerk, has already been developed through two iterations,different but evolutive and each responding to a specific context (Paris, Melbourne).

The general shape of the Urinotron crosses the aesthetics of alchemy, the assembly of heterogeneous elements such as glass, steel, copper, carbon, aluminum, coal and constitutes a clandestine laboratory within which areassembled tanks,electrodes, batteries, cables. This great whole can be likened to a giant microbial battery, functional and whose objective is not so much to reproduce or improve existing research in laboratories on this subject bu trather, through a symbolic and artistic bias, to develop a setting criticism of the technique to test the limits and create, then, a material judgment on the industrial and capitalist context about bioenergies.

The challenges associated with the energy transition engage us to rethink our uses, our consumption patterns and industrialization in our societies. From household appliances to transportation, from the management of public lighting to the optimization of web pages (a google search would be equivalent to a boiling water pot), each gesture is the object of the calculation of its carbon footprint and its cost energy. The hyper-industrialization and the abstract nature of pollution and global warming (micro-particles, gases, spatials and elusive temporalities on an individual scale) produce a shift, a decoupling between the production of energy and its use. The growing intermediation of these circuits plays a role in the loss of consciousness of each person’s place. Yet as basic, unlimited and easily adaptable resources, renewable energies open up a resilient economic model.The intention of this project,symbolic and concrete, points the balance of power between a dominant, centralized electricity production and a microelectricity produced by each one of us, recyclable, reusable aand sustainable.

This form of resistance to this economy in tension can be found outside, also, of the exhibition context, and makes it possible to think the project with a nesting in the public space within which the installation would maintain its specificity but would be connected to common uses, useful and to rethink the public space and its uses.

Sandra and Gaspard Bébié-Valérian work together since 2004. Their projects include organic, chemical and electronic materials. Interested in energy, food, climate, health or natural and industrial resources, they explore the intricated dependencies between industrial society and the living (human, animal, plant and microbial). Thinking about nature and industry interest them because it reveals, according to them, a paradigm of power games constitutive elements in our society and break with a romantic vision of nature asan immutable environment.
Sandra et Gaspard Bébié-Valérian have exhibited and participated in several exhibitions and festivals including Voltaje Festival (Bogota), Rua Red (Dublin), the EDF Foundation (Paris),the Pyramide du Louvre (Paris), the BIAN (Montreal), Centraltrack (Dallas), the National Dramatic Center (Montpellier), SKOL artcenter and Art Souterrain (Montreal) or the Santa Monica art center (Barcelona)…