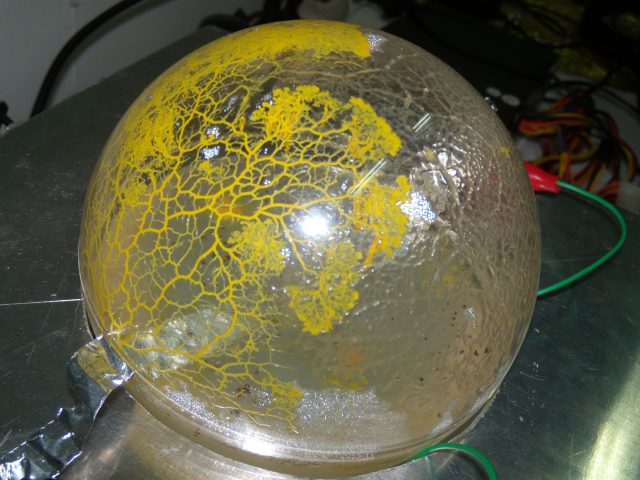 The start point of the installation it is to create a bio/artificial ecosystem that evolved symibiotically, generating a non-human sound composer. The bio / machine proposes an alliance between “intelligence” of a different nature, a chimeric device consisting of a biological pseudo intelligence (Physarum polycephalum) and an artificial psudo-intelligence based on genetic algorithms. In a situation of exchange and mutual influence in their evolution the bio/machina allow us to discover new emergent behaviors perceptible through lights patterns,sounds and their organization in time.

The first version of bsm/nhc was developed in 2015 at hangar.org <http://hangar.org> (Barcelona) and presented here in Piksel. This second versión was developed this year 82019) during a residence at QO2 (Brussels).

Experimental programmer and musician. He bases his work on the deconstruction of field recordings, no-conventional sinthesis and the creative use of technology errors. Luthier-digital with a “pure data” environment, which he uses to develop his own no conventional tools for processing and real time algorithmic generative composition. He can be placed somewhere between Computer Music, the Aesthetics of Error, and generative Noise. He seeks the creation of virtual sound universes, imaginary soundscapes that encourage active listening and a different sensibility toward the perception of sound phenomena.