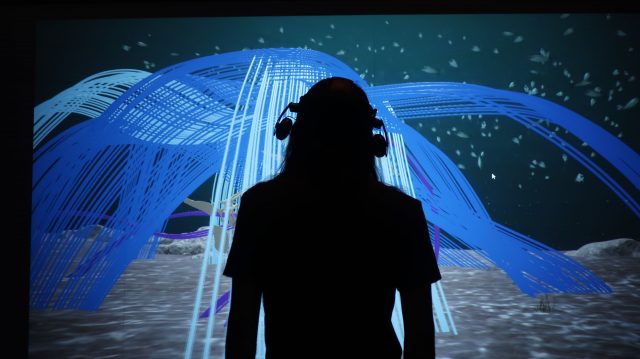 Fiber-Optic Ocean is a virtual reality experience that generates procedural music and light from live data. Fiber-Optic Ocean portrays the struggle of human beings to survive in the age of corporations via the metaphor of sharks in an ocean invaded by technology and interprets what happens when technology invades the world’s oceans.

Human beings’ selfish invasion of nature expands to the depth of oceans. Underwater surveillance cameras are revealing that sharks are drawn to fiber-optic cables and are biting down on them. One theory to explain this is that the magnetic field around the fiber-optic cables is stimulating the receptors in sharks’ mouths and luring them to perceive the cables as prey. Google and AT&T are covering the cables with Kevlar-like matting to protect the cables from breaking because of shark attacks. Currently, there are few fiber-optic cables going through the oceans. In the future, it is possible that each developed country may build its own Internet infrastructure in order to protect its government from information leaks. In this speculative future, there will be more fiber-optic cables going through the ocean, confusing and overwhelming the sharks. Disruption of sharks will affect the entire ecosystem.

Four life-size shark skeletons are trapped in an ocean made of fiber-optic threads. The piece procedurally composes music made with trombone and choral voices generated by data coming from the GPS locations of tagged live sharks and human Internet use. The fiber-optic cables going through the sharks blink at a rate based on the speed of live sharks tracked with GPS data. Fiber-optic threads composing the ocean blink based on the speed of the Internet, symbolized with the number of tweets per second. The current struggle between sharks and technology corporations is a pristine symbol of the ongoing conflict between nature and culture. The two sides clash nose to nose on a thin fiber-optic line.

Özge Samanci is an associate professor at Northwestern University. Her exhibition list includes FILE festival, SIGGRAPH Art Gallery, Currents New Media, The Tech Museum of Innovation, WRO Biennial, ADAF among others. Her graphic novel Dare to Disappoint has been translated into five languages. In 2017, she received the Berlin Prize and she was the Holtzbrinck Visual Arts Fellow at the American Academy in Berlin.